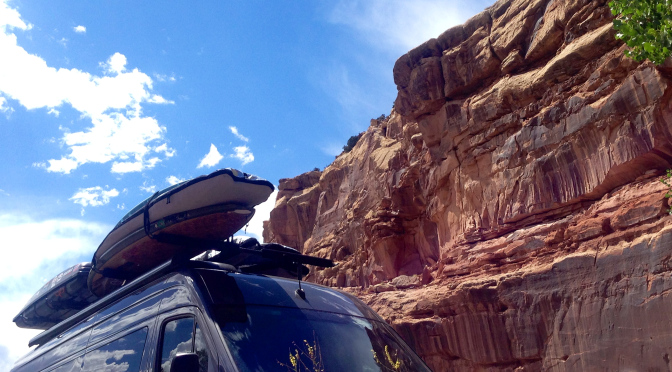 From Colorado Springs, we took the advice of another avid highway dweller and accomplished paddler, Michael Tavares, and headed to Buena Vista, Colorado, to start the next leg of our trip.

In BV, we found a stunning scenic backdrop amidst a quaint, Disneyesque facade that evoked a feeling of being placed right in the middle of an old Western film. The Disneyesque veneer was only one street deep, and behind the backyards of the adorable homes were miles of open range. With dozens of trails accessible from Main Street and a downtown whitewater park uniquely inviting you to play on the rapids of the Arkansas River, it was hard not to fall in love with this place.

After a little bit of exploring and checking out the local whitewater/outdoor shop, CKS, we followed recommendations to Eddyline Restaurant & Brewhouse for a great dinner of kale salad (Bethany also enjoyed some local elk & boar sausage) and a sampling of their microbrews.

With VANdal conveniently parked roadside at one of the downtown parks along the Arkansas River, we took in the scenery as dusk closed in on a nearly full moon night. After an amazing night’s rest, Bethany nearly forgot where she was — and this was what greeted her from VANdal’s king size bed upon awakening:

We walked along the whitewater park in the morning, testing out the icy waters and delighting in the climate: brisk, dry, and not an ounce of humidity.

Before leaving Buena Vista, we absolutely HAD to stop for coffee and a slice of Bebop-a-Rebop Rhubarb Pie (if you don’t know that one, you don’t speak fluent Prairie Home Companion) at a little cafe that HAD to be created in honor of the world’s best brown dog ever, Katie Lou. Uncanny likeness, wouldn’t you agree?

Since we had absolutely gorgeous weather, we decided to take Independence Pass. At 12,095 feet, Independence Pass is part of the Continental Divide which separates the watersheds that flow toward the Pacific or Atlantic oceans.

Before cruising up the Rocky Mountain Pass we made a stop at Twin Lakes for the scenic paddle of a lifetime.

Twin Lakes is a set of, as you might guess, twin lakes set at the base of Independence Pass at approximately 9,500 feet above sea level, about 20 miles south of Leadville, on State Highway 82. The setting was astonishing, the air crisp, and we virtually had the entire lake to ourselves, though we were quickly reminded of our altitude as our pace increased.

Thinking it would be hard to top that experience, we embarked on our drive over the continental divide of the Rockies. And we were in awe — it is an unparalleled bucket list drive along fragrant alpine forests, snow covered peaks, and winding switchbacks affording a new, spectacular view at every turn.

Of course, that drive wouldn’t be complete without a stop at the peak’s rest area where we could play in the snow field & take some pictures.

VANdal performed flawlessly up and over the mountain pass, utilizing its engine brake on the downhill to minimize breakage. As we coasted toward the base on the Aspen side, the fragrance of ponderosa pine was so intoxicating it was like driving into a sea of pine tree airfresheners.

We elected not to stop in Aspen, instead favoring a roadside lunch stop alongside a rolling riverbed in Basalt along highway 82 for grilled salmon and gluten free pasta with roasted tomatoes and onions.

Heading on toward Glenwood Springs, we knew we had to find one of the famous hot springs. After researching the area’s various springs we knew at once we didn’t want a tourist infested pool whose natural beauty and charm were sacrificed in favor of blatant commercialization.

Instead, we found this little gem — Penny Hot Springs — a set of natural hot (and whew! do we mean hot!) springs set along a roadside pull off a short distance from Carbondale. (East side of highway 133 just north of marker 55)

We were greeted with a lovely sunset, cold spring water from Crystal River juxtaposed by the steamy influx from the hot spring, and best of all: the place was our’s…(And free).

With those impromptu stopovers complete, we resupplied VANdal’s pantry at Whole Foods and continued our westward trek.

We laid our heads to rest that night in Fruita, Colorado so we could mountain bike their famous trails in the morning.

While the trails were every bit what good friends and online reviews had reported, we couldn’t help but find ourselves disappointed at the dingy, dilapidated city of Fruita. Compared to the other places we’d visited so far, we were quite expecting a little more charm.

After a couple of rides on Rustlers Loop, part of the Kokopelli Trail, we quickly continued onward toward Utah. Rustlers was a good beginner ride for us — rocky, meandering, and not very technical with iconic views of the Colorado River and surrounding vistas and mesas.

The drive through Utah was filled with amazement  — stunning rock formations punctuated by ever changing color displays, and a plethora of national parks to choose from. Opting for Scenic Byway 12 so we could experience the biggest scenic bang for our buck, we stopped at a select few parks along the route with an emphasis on Zion.

When given the choice between alpine forests or desert landscapes, however, we choose forests all day long.

Still, that didn’t stop us from appreciating the beauty that literally surrounded us. Our first stop at Capitol Reef National Park, an oasis of red rock cliffs, canyons, domes, and bridges, offered a quick two mile hike with Katie to Hickman Natural Bridge. Katie and the two of us were quite exhausted by the hot desert temps so we cooled off in the river before heading on to Bryce Canyon National Park.

The drive oscillated between high desert and mountain forest topography, drastically adjusting from dry and hot to cool and lush depending on the highway’s proximity to water resources. In the more fertile environments, it was common to see cows at open pastures right along the road.

Entering Bryce Canyon, with its signature “hoodoo-iferous” terrain, was unlike anything we had seen and an incredible vantage point for when we rolled in at sunset.

Hoodoos are unique totem pole shaped spires usually found in high desert areas formed at the bottom of the canyon by many years of freeze/thaw cycles and erosion. Nowhere are they more common than in Bryce Canyon.

Here at Bryce, we see many a fellow roadtripper…. But this one gets the prize for being most obnoxious.

Though packed with tourists which detracted from the natural beauty, Bryce Canyon ranks high on the list of must-be-seen in southern Utah. After a stunning sunset overlooking Bryce’s amphitheater, we continued our cruise to Zion National Park.